We are delighted to announce this year’s Christmas Business Lunch will have Paddy Cosgrave as speaker.

You will enjoy a delicious lunch at No. 1 Pery Square Hotel & Spa, listen to Paddy talk about his experience in founding Web Summit, and meet likeminded people with an interest in sparking business in #Limerick.

All of your ticket fee will go straight into maintaining, restoring, and bringing awareness to Limerick’s historic streets and monuments. Limerick Civic Trust is an independent non-profit charity, and has been carrying out this kind of work in Limerick since 1983.

Email info@limerickcivictrust.ie to book your spot, and thank you for your support. 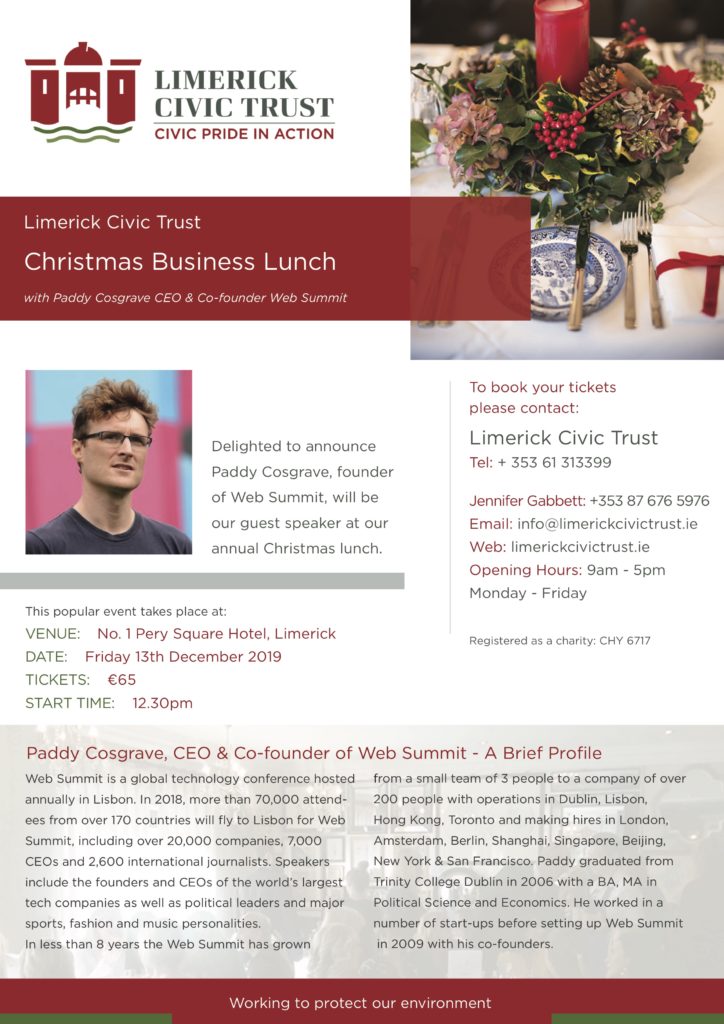 The Attorney General, Seamus Woulfe, will be the guest speaker at our hugely popular festive business lunch.

This lunch always provides a great setting to entertain clients and network. Places are limited, so please book before it’s too late.

Seamus Woulfe S.C., Attorney General, was awarded a BA (Mod) (Legal Science) from Trinity College Dublin in 1984. He then obtained an LLM Degree from Dalhousie University in Canada in 1986. In 1987, he was awarded the Barrister-at-Law degree from the Honorable Society of King’s Inns, Dublin and began practising at the Bar in October 1987. He was a part-time Lecturer in Law at Trinity College Dublin from 1987 to 1992, and was called to the Inner Bar in March 2005. His practice was of a general nature, mainly in the area of civil, public and commercial law. He also acted as Legal Assessor for regulatory bodies such as the Medical Council, the Nursing and Midwifery Board, the Pharmaceutical Society and the Teaching Council of Ireland, among others. He continued practise as a Senior Counsel from 2005 until his appointment as Attorney General on 14 June 2017.

“Putting Our Best Coat On”

It was a full house at our annual Christmas Lunch in No.1 Pery Square on 4th December

A broad spectrum of companies were represented at the festive lunch, including VHI, Limerick Chamber, Glenstall Abbey and many, many more.

She noted how she is “a big supporter” of the Trust and hopes that as economy upturns “more people will get behind the Trust as it is really doing a great job”.

“If we want investors and tourists coming to our city to recommend us, it’s important they see pride in place and a good presentation of our heritage assets and spaces. It is important that we put our best coat on at all times and Limerick Civic Trust is helping us do that.”