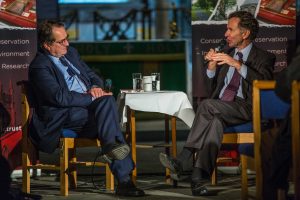 In the first of the Autumn Lecture Series, Stephen Green discussed “The European Identity – Historical and Cultural Realities We Cannot Deny.”

What–if anything–do the member states of the European Union have in common? Amidst all the variety, can one even speak of a European identity? Stephen Green explored these questions and argued for the necessity of the European voice in the international community.

The events are in conjunction with the Kemmy Business School, Limerick Institute of Technology, Limerick City and County Council and The Irish Examiner. It is a six-part series of public lectures to be delivered by internationally renowned commentators and thought-leaders in their field.

The six-part series of public lectures will examine many topical issues like the impact of Brexit, immigration, integration in multicultural societies, censorship and lots more.

The lectures will run on Thursday evenings from September 14 to October 19 in St. Mary’s Cathedral. Lectures start at 8pm and admission is €12 or concessions €8 per lecture.

Proceeds from the series will be used by the Limerick Civic Trust for the restoration of St. Munchin’s Church in the heart of King’s Island.

Tickets are available at www.limerickcivictrust.ie/events or www.eventbrite.ie. Tickets are also available from The Limerick Civic Trust offices in the Bishop’s Palace, Church Street or on the door on each of the nights.